A game all about collecting coins and being faster than your friends!

Can you be the speediest cat? There are 32 different "rooms" that you can explore. Within each room, there is exactly one (1) SPEEDCOIN that you can collect! Collecting the 32nd coin will immediately end the game and display your completion time and the number of deaths you had!

The coins can be collected in any order, so use your creativity to think of creative routes to get those coins even faster the next time! Or, you could attempt a no-deaths run! Share your high scores in the comments below to compete with the SPEEDCAT community! Join our Discord to discuss SPEEDCAT and much much more!

In SPEEDCAT, there are two modes: "Normal Mode" and "Hard Mode". The only difference between the two modes is that some blocks will blink on and off in "Hard Mode", making some jumps more difficult than in "Normal Mode". Other than that, the modes are identical.

This is a handy reference in case you want to heavily optimize your route! Each square on this map represents one cel in-game (an 8x8 region). Here's a legend for what each color means:

NOTE: This map is slightly out of date since version 1.1 was released. The map above is for version 1.0. I'll try to update it soon.

SPEEDCAT has been my "pet" project for the past 2.5 years. It started as an experiment for me to learn more about how to detect and resolve 2d collisions. When I started, I didn't realize I'd be finishing the entire game!

I've taken my time on this game. Whenever I felt like my heart was in it, I'd put some work into the game, and whenever I was feeling burnt out, I took a break! So while it's taken longer to develop than the average development time for a game this size, I feel like this game is the culmination of all I've learned thus far in game development!

Do you want to play SPEEDCAT on stream or in a YouTube video? Go right ahead! Use #SPEEDCAT for your go-live or video announcements on Twitter so we can find your work! Also, don't be shy about joining the Discord... it's a great place to share your SPEEDCAT strategies, discuss game development, and more!

Curious about the crab in Room 17? The crab's name is Sandy, an adorable character from Sandy's Great Escape, developed by Mocha Moose Games! Check it out here!

Want to leave a tip? You can donate to my game development efforts on Ko-Fi!

I developed some of this game live on Twitch! We do cozy game development streams on Tuesdays at 3pm ET and play cozy games on Fridays at 8am ET. Come hang out!

Most of my game dev and content creation announcements land on Twitter. Following me on the bird app is the single best way to stay up to date on what I'm working on!

Just download the appropriate zip for your operating system and double-click the executable to get started!

NOTE: in order to take screenshots, you MUST download the executable. Playing in the browser restricts the "Press F6 to take a screenshot" feature. 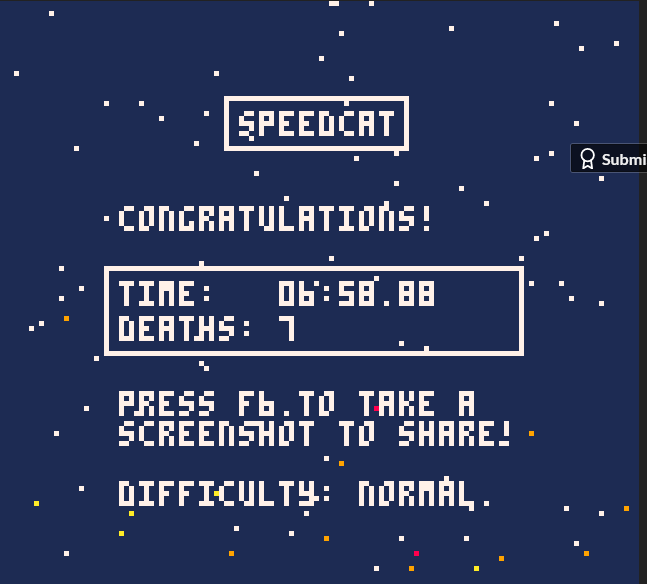 Getting lost is totally understandable! And wow, 7 minutes is so speedy :O

Didn’t realize there was a map in the description so i got lost for the last two! 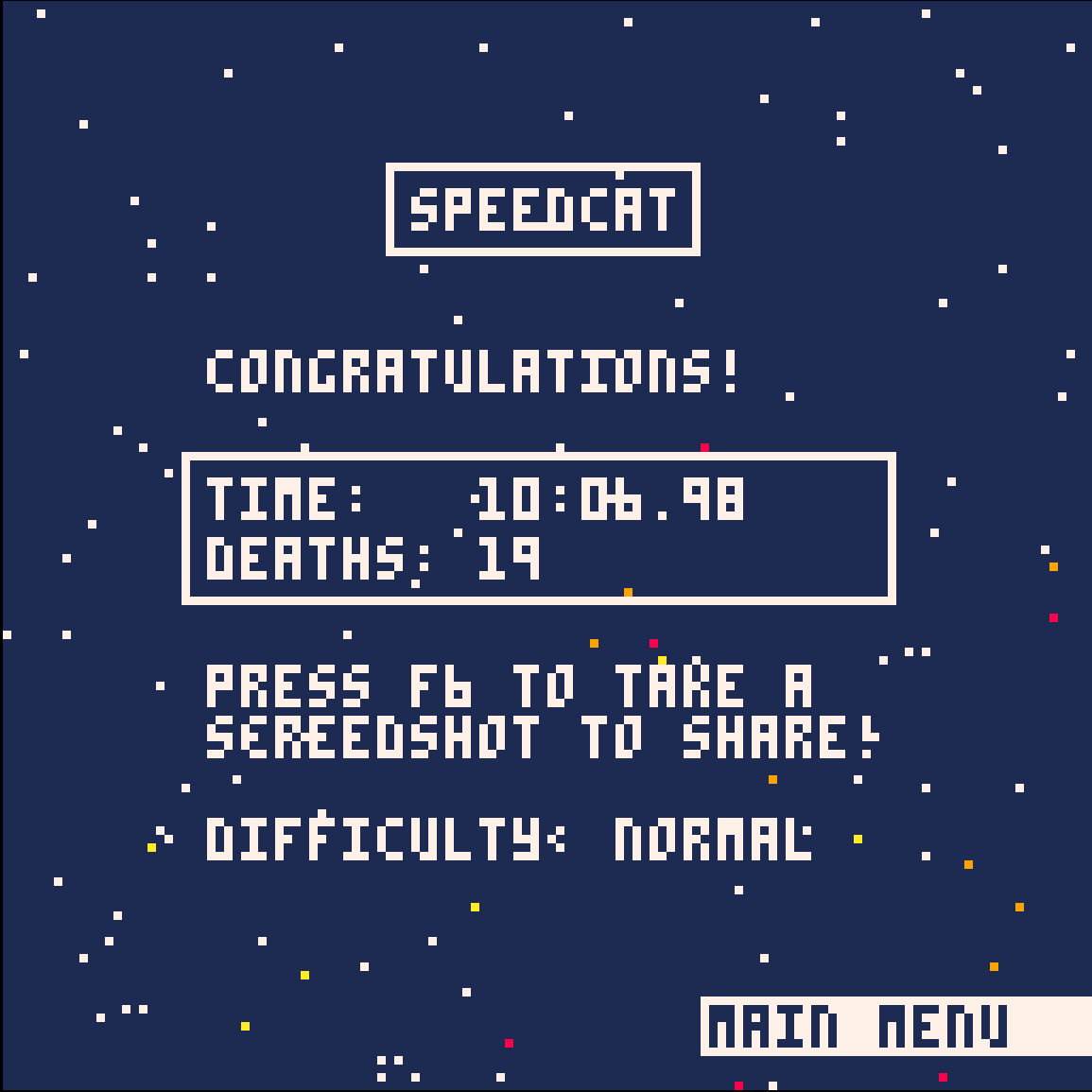 Thank you so much for playing! And congrats on the incredible 10 minute time!!

Wow, this is an amazing game: minimalist, clean and addictive! Congratulations for this achievement.

I have to get better XD

Thank you so so much for playing and for the kind words friend!! It means a lot 💜

Wow, this was such a good platformer! Had a real blast with it! Nice job! Map layout was great, the platforming felt spot on, everything about it felt really good to play. 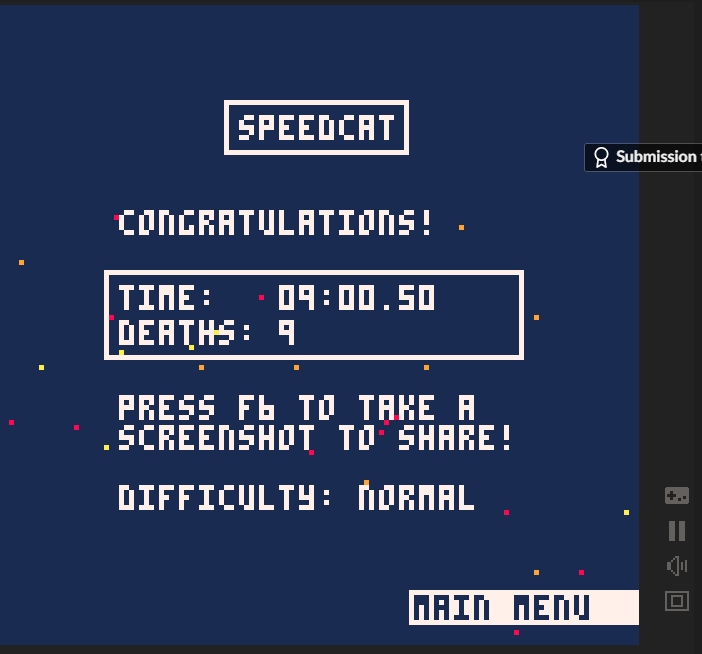 Thank you so much for playing and for your kind words!! And wow, 9 minutes is a pretty good time!!

Great platforming game and with a cat :). 8m36s I can't upload the image.

Thank you so much for playing! 8 minutes is a great time!!

Speedcat is a solid platformer with an old school charm that really reminds me of Alien Hominid's PDA games. Well worth the ten minutes or so of play time!

Haha I love that you found the secret ending 😉

Thank you so much for playing and for this epic video! I will treasure it forever

Thank you so much for playing!

Finally got a chance to give this a go today.  Great little game, right up my alley with how quick and easy it was to get into!  I think I did pretty good for a first try, I like that the whole game world is interconnected, tried making a mental map in my head as I went along. 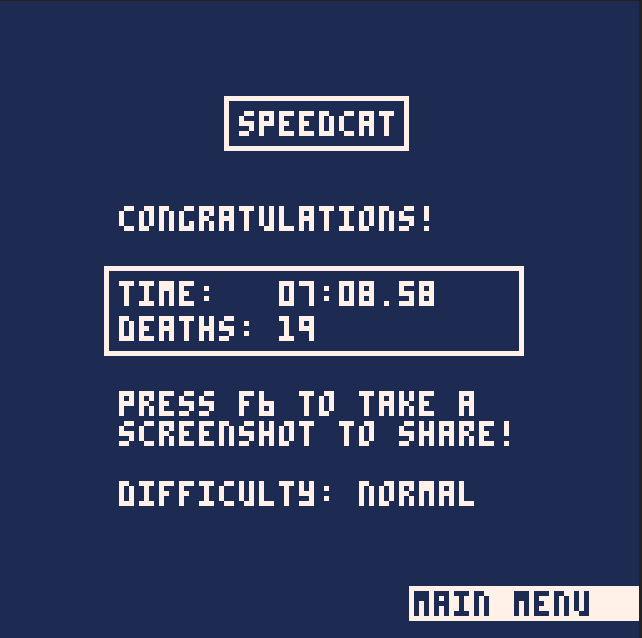 DANG 7 minutes is speedy for your first time!! Incredible work. Thank you so much for playing!!

I love the movement and fluidity, really feels great and I can have a lot of hours just having fun, very well done!

Thank you so much for playing Tomas it means so much!!

This is good as hell! Fast, fluid exploration that feels GREAT to control. So much love and care went into the level design here. I wish the map was included in-game, but having it side-by-side with the pico iFrame may have actually been MORE helpful. I just barely cleared the 13-minute clear time, but I closed my win screen too fast because I was frantically jumping moments before lol

Thank you SO much for playing!! 13 minutes is a great first time! Yes, I am remiss about an in-game map being absent but definitely something I’ll try to work into a future platformer like this! 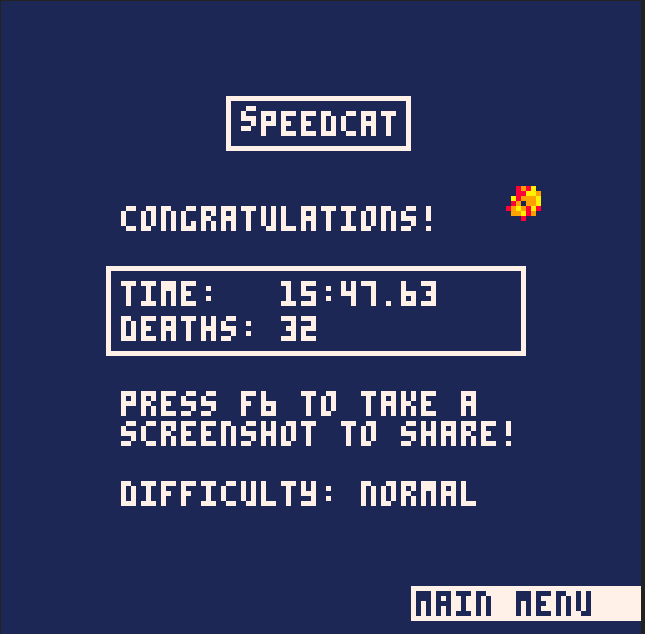 Thank you so much for playing!! A lot of time and playtesting went into the movement; it makes me so happy to hear it was worth it!

I am here to boost engagement and fluff the metrics, etc.

Thank you so much for playing my game!! And congrats on the WR find e thus far; you are incredibly speedy!!

I am beyond excited to see this game finally finished.

I remember the day when I first heard about Speedcat. A cat that runs, jumps AND collects coins? It sounded too good to be true, and yet I could imagine it perfectly in my head.

Then, when I first laid eyes upon the pixels that comprised the Speedcat - the gorgeous pixels that they are - I could barely contain myself.

The game is even more impressive. I remember playing it when there were a mere 16 rooms to be explored and 16 coins to be collected. What has changed since then?

Well, Speedcat literally doubled in size. And, not just that. It QUADRUPLED in quality!

The puzzles are outstanding. The room placement devilishly complex. Speedcat rewards exploration and experimentation - and it punishes death much like a well-loving mother would punish her child for taking a cookie from that ever-elusive jar in the kitchen cupboard.

The cat, which tends to speed, is love. The cat is life. This game is a marvel of modern-day game development. It reads itself like the introductory chapter in a story of a personality that will go on to make great things - as greater than a Speedcat as something can possibly be.

Fletch, you outdid yourself on this one. I can't wait to see where you continue to take Speedcat and I am excited to see you explore the rest of the Speedanimal kingdom.

Numa, I love reading your reviews! They always make me laugh!!

You’ll be happy to know that the next game is about a duck with supersonic quacks… And I’m livestreaming the development on Twitch!

Thank you so so much for playing my game! It means so much 💜

And I do love playing your games!
After you've given us the incredible sensation of being a mouse in MouseMaze and the experience of a lifetime in Speedcat, I can't help but feel supremely excited about the concept of seeing the world as "a duck with supersonic quacks", as you describe it.

Young Fletchwalker, I will watch your career with great interest.

And I will do so LIVE, only on Twitch.tv/Fletchmakes

Such a lovely game! It was really great seeing your dev process on stream!

Thank you so so much!! I had a ton of fun streaming progress on this one. I’m excited to be developing the next game now!

Great job this is really good!

Thank you so so much for playing!!

Thank you for playing!! 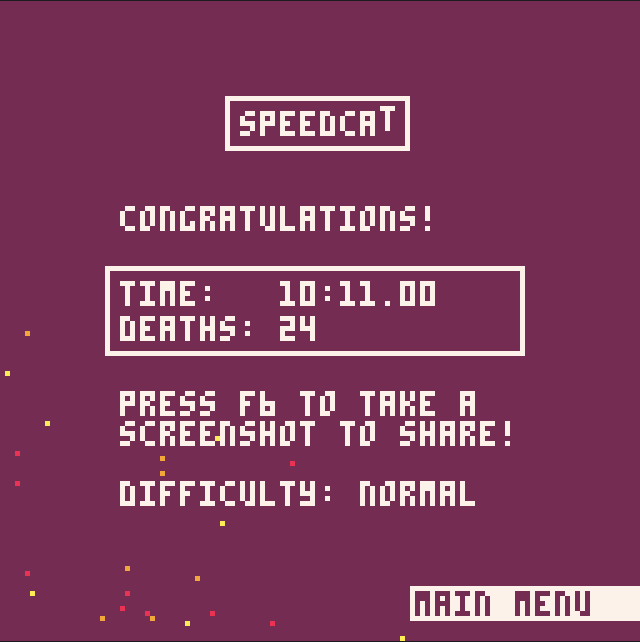 Wow this was a really fun and well designed game! The overall game design and concept are super well executed imo and the levels are excellent. The introduction of mechanics didn’t feel overwhelming and I quickly understood how to approach the puzzles presented! I got a little lost at the end, so I really appreciated the world map image you posted!

Overall super fun experience and I love the replayability of this, definitely gonna keep playing this one! Super huge congrats on the release! :D

Thank you so much for playing and for your kind review!!! Great time btw; 10 minutes is impressive! 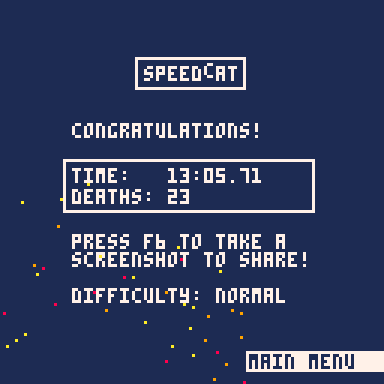 I got lost towards the end when I had to collect the last two gems lol.

This felt more like a really well designed metroidvania in a lot of ways. Loved the overall design of every level. Especially love how the design of every level actually felt very unique and had a beautiful flow. Not too linear, but linear enough to ensure you don't really stop too often and always have some idea at the very least of what the way forward is.

You even implemented some simple but rather cool puzzles. The kind you wouldn't mind trying again and again since they're fast to solve and have answers which are immediately discernible. Also love the simple indicators to show which portals are connected. Perfect for when you're moving fast.

At first I felt that the jump and the hitbox of the cat were a little off, but going through certain sections of the map again, I found myself just flying through stages and felt that the controls were honestly perfect. I was annoyed at the lack of any in-game map whatsoever since I wasn't entirely sure which levels led to where, though the game is meant to be replayed so learning the map and acting accordingly is part of the experience.

It's just a very well designed game and ton of a fun. I'll be trying to get a faster time for sure lol. Amazing work on this

Thank you so so much for this in-depth review! You are so kind 😭 I wish I had the PICO-8 tokens to add the world-map in-game, but alas, my code is not very optimized 😁 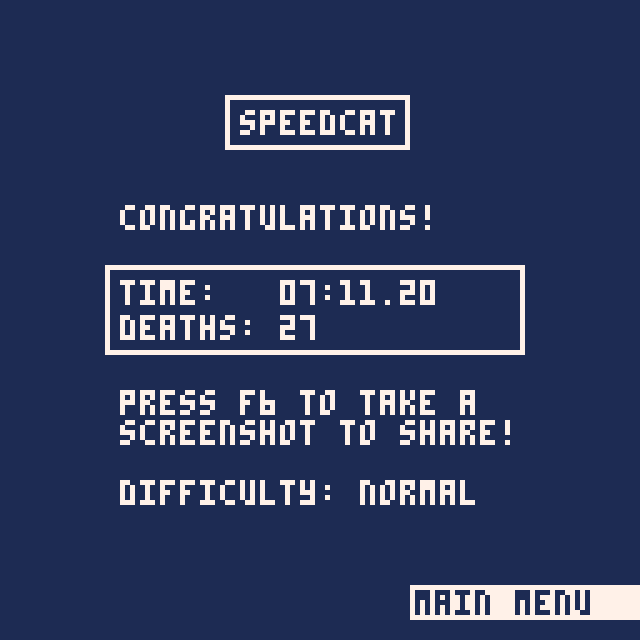 Just finished playing, it's super much fun to play!:D

Thank you so so much for playing!! Fantastic time! 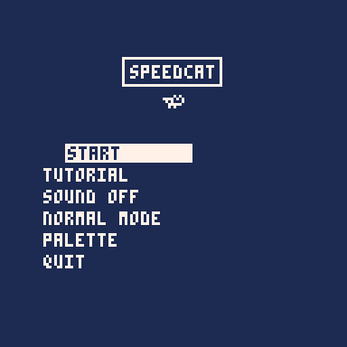 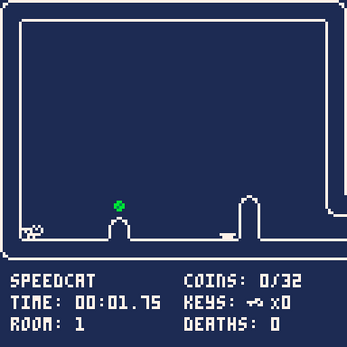 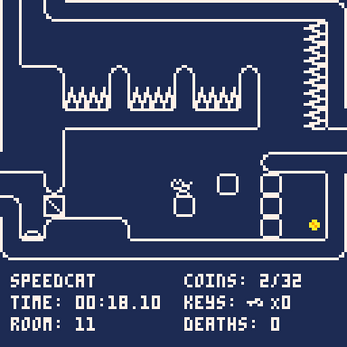 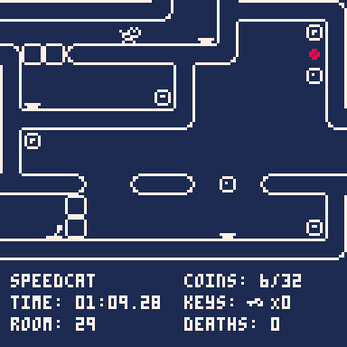